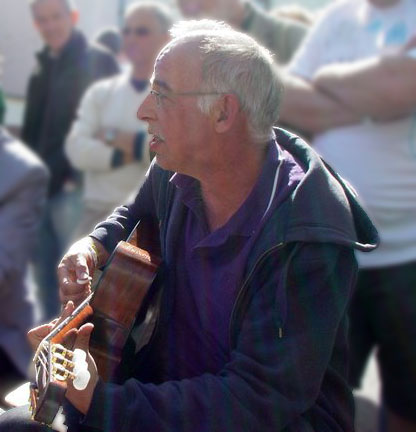 Once I was 8 years old. I remember me playing piano. Classical education till 15. My parents got me a guitar for my birthday. Couldn't figure out how to play the damned thing until some classmates showed me how. From then on I could not stop. Bill Arensma introduced me to modern jazz with all of its chords. Then someone took me to the Breda Jazz Festival, where I heard the music of Django Reinhardt for the first time (as played by an unknown Gadjo Gypsy Trio from Rotterdam). Much later in the eighties WASO with Fapy Lafertin and Coen de Kauter performed at the Haarlem Jazz Club, astonishing! I immediately bought two of their LP's with their original autographs. But still it took me a lot of years to finally realize this was the music for me. My love organized that I could follow Fapy's masterclasses, on the Dutch-Belgium border and nowadays his cousin Jan Limberger is trying very hard to teach me his licks and tricks in Rijswijk. I must be the ideal student: Every two weeks Jan can teach me the same thing over and over again as I keep forgetting. Minor Swing? What's that all about?

What was the first concert you ever went to?
It was a Classic Concert in the "Concertgebouw Amsterdam". My grandmother took me there several times telling me I would not like the Beatles once I did grow up.
I remember the fantastic noises of the percussive instruments. I did not understand why that man in front kept waving at the members of the orchestra and nobody waved back.

Who was your biggest musical influence growing up?
Perhaps there is some Gypsi in my DNA, because my grandfather (father's side) used to be in a band of brothers that travelled from village to village in Zealand. They played all kind of instruments and my grandfather was at his best on the accordeon. Pity I never got the chance to hear him play, though my latest memory of him is that he picked up the mouthorgan laying on the piano at my parents place, jamming with me on the piano.
And of course there is Chopin (my mother and her father played his work) and the Beatles, though friends reminded me constantly that there were other bands as well, like the Rolling Somethings. I refused to listen carefully at that time. My auntie Fina was a big Beatles fan and she played A Hard Days Night over and over again on her little Philips RecordPlayer. Why I like the Beatles? Come on!
But once I came to know about Django Reinhardt it's gypsyjazz / jazz manouche that I listen the most at. To feel at ease I need Diana Krall.

Are you in a band? Have you been in bands?
At this moment I play a lot in "obmoC" ,a jazzcombo with a twist (with Ellen Volkers, Gert-Jan Kooren and Alex Artzenius).
Sometimes with Primavera (Vera Bruggeman's band. She is a singer, and well-known painting artist from Haarlem. Actually I'm very honoured that Fred Leeflang on of Holland's best Saxophoneplayers is with me in this band (with his son Tobias Leeflang and Sjors van Gussenhoven on drums).

And as if I've plenty of time Käthe van den Hurk got me in her band Jazz&Zo (with Jasper Swunk and Albert Peters)
let me tell you,these three bands have nothing to do with Django....well there's always a jamsession going on

My first band was "The Cornuco's", but all we did was eating cornuco's which we bought for a 'kwartje', the guitar I played was nothing but an empty sigar-box. I was 12 at that time.
The real thing was a band called The Schnitzels. (Maarten Eysker, Ron Knotter, Louis Donker, Richard Besteman. We played Byrds, Dylan and songs written by me or Maarten,
Tosti Dzjim, a rock and roll band that played just one gig in Nieuw Vennep as "the new rock sensation" (Ron Knotter, Wim van Putten, Wim van Lohuizen),
Elfin Glade One was the next band playing just my songs and some westcoastsongs (with the late Bert van Lunteren -later playing in Fruitcake- Wim van lohuizen, Ton van Buchenum and Pieter van Donselaar),
The Rhythm Sellers, a danceband existing since before the great world war 2, blown again into life by Henk van Donselaar, Rob's father, I played the rhythm guitar,
Some-Like-It-Hot a folkduo with Maarten Eysker,
Elfin Glade (two) a Bossa Nova band with Yvonne Weyers, Willem vd Poll, Peter Huiting (later Jan Bes), Frans van Eijndhoven and Heino Hoekema,
Pangea, a jazz-rock band with Mark Neerincx, Heino Hoekema, Benno Boeters, Hugo Pinksterboer and Gijs Bierenbroodspot,
XZT, a jazz trio with Willem van de Poll (sax) and Heino Hoekema (bass),
Alice Mac and The Mootnix, a partyband with Ron Knotter, Heino Hoekema, Gijs Bierenbroodspot, Winke Wagner and Ed Remmee. At first played Mark Neerincx the keyboards but later I saw myself playing the piano as well,
LSD (Lodewijk Schommel Dansorkest, now called Louis Swing Orchestre), an orchestra from Amsterdam, doing an interesting project ("De Bonte Dinsdagavond Trein")with a theatrical company Toetssteen,
Sacré Manouche, my gypsy band playing gipsyjazz-style of course, with lots of musicians (Pieter van Donselaar, Ewoud Plate, Iwan Basoski, Nico Snel, Kees Hoofd,Joris de Bie, Tom Bak,Jeroen Walstra, Jos Caspers etc etc, they came and they went.
Wietze van Foeken was the last bassplayer, Fiel van Veen on violin and Dustin Verhelst played the rhythm guitar .
Some forever-not-in-my-memory-accordeonplayer from Lelystad left the group two weeks before a gig, just like that, thats why after 7 years I stopped pulling this car, but nowadays (2016)just once in a while Sacré Manouche is on its feet again.

If you could jam with anyone, who would it be?
If I could jam with anyone it would be Peter Schön. That's for nostalgic reasons only (He's much to good for me, now playing all over the world). He was my friend when I was 16 and was already playing music while I was still playing football in the schoolyard, we lost touch then
Paul McCartney of course, who wouldn't
Al Jarreau, he seems such a nice person
Diana Krall, I'm sure she can inspire me leaving notes out instead of finding more notes to play every time.
And of course Django's reincarnation....(I once jammed with Jimmy for 55 seconds, my 55 seconds of fame, playing Blue Bossa).